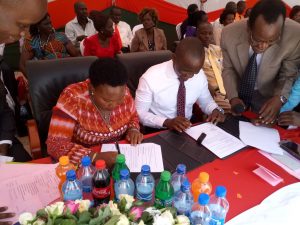 This agreement is part of a project that RCK is implementing through the Amkeni Wakenya initiative funded by the United Nations Development Programme. The project aims to increase participation of the local community through capacity building and awareness creation activities. Through this initiative, some 48 members of the Turkana County Assembly and other technical staff will receive training on legal and practical means of citizen engagement. “MCAs need to understand crucial elements of public participation in order for them to fully realize the promise of article 10 of the Constitution of Kenya, 2010,” said Ms. Ndonga.
The agreement comes at a time when new entrants to the Assembly, elected in 2017, account for 50 percent of the membership. They will form the biggest beneficiaries of this initiative. This initiative also builds confidence between the County Government of Turkana and other stakeholders, especially civil society organizations.