Kenya acceded the 1951 Convention and the 1967 protocol on 16th May 1966 and 13th November1981 respectively and ratified the 1969 OAU Convention on 23rd June 1992. These instruments were later domesticated by the Kenyan Parliament through the Refugees Act, 2006.

Who is an asylum seeker?
An asylum seeker is someone who has entered another state to seek protection but whose claim for protection has not been ascertained by the country in which he is seeking protection in.  The asylum seeker’s claim is ascertained through a process called refugee status determination (RSD). The Refugee Act 2006 gives Kenya the authority to grant or reject refugee status to a person who applies for protection based on the merits of their case. It is important to remember that an asylum seeker has permission to remain in the country until the assessment of his/her case is finalized. In this regard, the Refugees Act 2006, and the 2009 regulations to the Act mandates the government department in charge of administration of refugees (currently the Refugee Affairs secretariat) to issue relevant documents to such asylum seekers.

Who is a Returnee?
A returnee is a former refugee or internally displaced person who returns to their country or area of origin, whether spontaneously or in an organized manner.

Who is a Refugee?
According to the 1951 Convention and the 1969 OAU Convention, a refugee is someone who:

The definition of a refugee as per the Refugees Act, 2006 combines the definitions of the 1951 and 1969 Conventions, but adds ‘sex’ as a ground for persecution. It also defines refugees as either Statutory or Prima farcie i.e.

The Refugees Act, 2006 gives Kenya the authority to grant or refuse refugee status to a person who applies for protection.

Elements of the definition of a refugee:

The process by which one is recognized as a refugee after being an asylum seeker is the Refugee Status Determination (RSD). i.e. it is the legal and/or administrative process by which governments receiving asylum seekers determine whether persons seeking protection meet the international legal definition of a refugee, thus qualifying for protection and assistance under international, regional or national law. The process could take anything between a few months to a few years.

In Kenya, the process is carried out by UNHCR and the Refugee Affairs Secretariat (RAS). RCK is not involved in RSD, but it offers consultation services to asylum seekers who wish to be guided in the presentation of their claims to UNHCR.

During the RSD process, asylum seekers who have made application for recognition as refugees to the Governments of the Country in which they are seeking protection are immune from prosecution for unlawful presence.

In Kenya the process is carried out the following way:

Below is a figurative representation of the RSD Process as per the Refugees Act, 2006: 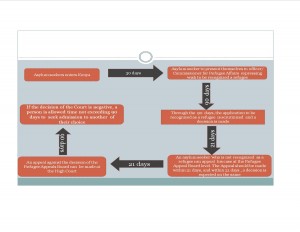 Despite the process described above, UNHCR has been offering supportive role to RAS in RSD processes. As of 2018, UNHCR and RAS had in place a technical advisory committee that is involved in the review of RSD decisions by case workers before the Commissioner for Refugee Affairs endorses the decisions either rejecting or approving the application.

Under the Refugee Act 2006, the Government of Kenya, more specifically Refugee Affairs Secretariat (RAS) under the Ministry of Interior and Coordination of National Government, has the overall responsibility for all administration, coordination and management of refugee matters. The Government of Kenya has directed that refugees must reside in designated camps to qualify for assistance. Kenya considers itself as only a country of asylum for as long as a refugee has a mandate or is in the process of acquiring or renewing one.

There are a number of legal frameworks guiding the work around refugees, returnees and asylum seekers. At the International level, the United Nations Convention Relating to the Status of Refugees is the cornerstone in the body of laws that establish standards for refugee protection. It is an international convention defining who is a refugee, setting out the rights of individuals who are granted asylum as well as the responsibilities of nations that grant asylum.

The convention was approved by the United Nations at a conference in 1951. Initially, it was limited to post-World War ll refugees, but in 1967 it was expanded to encompass refugees internationally. The 1967 of the Convention was ratified in Geneva and is therefore often referred to as “the Geneva Convention”, though it is not one of the Geneva Conventions specifically dealing with permissible behavior in times of war.

Today there are 147 signatories to the 1967 Convention Relating to the Status of Refugees.

At the National level, the Refugee Act was approved by the Kenyan Parliament in 2006 and it:

Brief History of Refugee Management
1963-1989
Kenya has hosted refugees since attaining independence on 12 December, 1963. These refugees were mainly from Uganda, Sudan and Ethiopia. They were about 20,000 of them between 1963 and 1989. During this period, the Government of Kenya was responsible for their management. This included refugee status determination (RSD) through the Refugee Secretariat under the Ministry of Home Affairs.
Although there was no domestic refugee law, the idea of a refugee law was formally proposed at the government level. An amendment to the Immigration Act, 1967 was debated and passed in 1972. The amendment provided for the Class M permit that was issued by the Immigration Department. This remained law until a comprehensive one was enacted in 2006.
However, the refugee management system was overwhelmed by a large influx of refugees from Somalia and Ethiopia. The political turmoil in these countries between 1990 and 1992 pushed more than 200,000 asylum seekers into Kenya. The Government of Kenya could not handle the numbers and therefore handed refugee management to UNHCR. This was also the time that the refugee camps were firmly established in refugee management.

1990 – 2007
• The crisis and political instability in Somalia, Sudan, Ethiopia and Rwanda led to the influx of refugees in Kenya. The numbers were estimated at 400,000 and as a result, the refugee camps wre established in Rift Valley, North Eastern and Coast provinces.
• It is notable that in 1992, Kenya experienced clashes in various parts of the country that resulted in IDPs.
• At the height of the conflicts in Somalia and Ethiopia, an estimated 3000 Somalis and 1000 Ethiopians crossed the border into Kenya.
• During this period, the Government handed over the responsibilities of RSD and refugee management to UNHCR.
• In 1994, the Government, NGOs and UN agencies reviewed the 1991 draft refugee bill but the final product was unacceptable to both sides and the Bill was shelved.
• In 1999, the Government held wider consultations with civil society actors including RCK and other NGOs on the 1994 Refugee Bill, which became the Refugee Bill 2000. Between 2000-2002, the Refugee Bill was reviewed at least 3 times but was not published in the Kenya Gazette.
• In 2003, the Government, RCK, NGOs and UN agencies reviewed the Refugee Bill 2000 and made recommendations. The Bill was published as the Refugee Bill 2003.The Bill was introduced to Parliament, but it lapsed when Parliament went on recess for the year. In 2006, the Refugee Bill was re-published (after its expiry in 2003) and became the Refugee Bill 2006. The Refugee Bill was introduced to Parliament for the second time, during which time it was unanimously voted into law and received presidential assent on December 29th 2006. The Act was gazetted on May 15th 2007, with the 1st Commissioner for Refugee Affairs being appointed on December 7th 2007.

2007 – present
• This period was characterized by a rise in terrorist incidences and attacks, resulting in the death of Kenyans. There was also the popularization of the notion that refugees and asylum seekers present a threat to security, and that their presence in the country exacerbates occurrence of terrorist incidences.
• In 2010 the government of Kenya initiated a project to have all refugees in Dadaab and Kakuma refugee camps and Nairobi registered and issued with refugee identity cards. The IDs would contain the government seal, which the police had been asking for whenever they encountered the refugees. All refugees who were registered received an identification card that is similar to the Kenyan national identity card but with a different color scheme and a refugee inscription on it. The Refugee Identity cards are valid for a five year period.
• In March 2014, a Directive requiring that all refugees reside in refugee camps was issued by the Government. The Directive was challenged at the High Court of Kenya and a judgment issued, which declared that the Directive was a violation of the constitutionally guaranteed freedom of movement and a violation of the principle of non- refoulment, to which Kenya should observe in line with refugee law.
• In December 2014, amendments were made to the Refugees Act, 2006 through the Security Laws Amendment Act, 2014. The amendments among others sought to cap the number of refugees present in Kenya at any one given time at 150,000, and also required that all refugees and asylum seekers reside in camps. The legality of the provisions of the Security Laws Amendment Act were challenged at the High Court of Kenya. In February 2015, the High Court ruled that the stipulation seeking to cap the number of Refugees at 150,000 was unconstitutional.
• After the Westgate Mall Attack in September 2013, a joint Parliamentary Committee on Administration and National Security and that of Defence and Foreign Relations was tasked to investigate the circumstances leading to the terror attack at the Mall, among other terrorist incidences in the country. In its report tabled in December 2013, before the National Assembly, the Committee recommended the repeal of the Refugee Act 2006 among other recommendations.
• Gaps in refugee reception, registration and residence of refugees are also identified with regard to the Refugees Act, 2006
• In 2014, the Government through Refugee Affairs Secretariat (RAS), formally the Department of Refugee Affairs, initiated a review process of the Refugees Act, 2006 and the development process of the National Asylum Policy by constituting a Taskforce comprising select partners from the Urban Refugee protection Network (URPN).
• As at July 2016, a Refugee Bill 2016 had undergone the 1st reading in the National Assembly. The Bill was committed to the Departmental Committee on Administration and National Security (DCANS) for further review and for purposes of ensuring public inputs incorporation through public participation as per the requirements of the Kenya Constitution 2010. The public hearing on the Bill was set for 9th August 2016. The public was also invited to submit memoranda on the Refugee Bill 2016 to the Office of the Clerk of the National Assembly.
• On 6th May 2016, the Principal Secretary, Ministry of Interior and Coordination of National Government, Eng. Karanja Kibicho, announced the immediate disbandment of the Department of Refugee Affairs (DRA). The Refugee Affairs Secretariat (RAS) took up the mandate of DRA with amendments to the Refugees Act 2006 being made to legally anchor it in law.
• Currently, RAS is spearheading a review process of the Refugees Act, 2006. A bill was passed by Parliament in 2017 but was rejected by the President for want of sufficient public participation. The bill is currently under review with the aim of reintroducing the same in Parliament for reconsideration and endorsement.

Are you new in Kenya?

Please confirm deletion. There is no undo!
We use cookies to ensure that we give you the best experience on our website. If you continue to use this site we will assume that you are happy with it.Ok