Each year on the 20th of June, the world observes World Refugee (WRD). The day is meant to bring attention to the millions of displaced persons who require assistance to restore their dignity and rights. The main WRD was celebrated in Nairobi. However there were celebrations held in Dadaab and Kakuma refugee camps. The day was themed ‘Include all, empower all.’ The theme was framed in the context of the main objective of the Comprehensive Refugee Response Framework (CRRF); to increase inclusion of refugees and asylum seekers in the societies that host them.

The world refugee day event was held at the University of Nairobi grounds. It was graced by the Chief Administrative Officer (CAS) of the Ministry of Interior and Coordination of National Government Honourable Patrick Ntutu. The CAS represented the Cabinet Secretary for Interior and Coordination of National Government, Hon. Dr. Fred Matiangi. He was accompanied by the Principal Secretary for Immigration Major General (Rtd) Dr. Gordon Kihalangwa and the acting Commissioner for Refugee Affairs (RAS) Mr. Kodeck Makori. At the event were other dignitaries from foreign embassies, UNHCR officials and other refugee agencies.

Picture 1: Refugees and asylum seekers lining up to access legal information at the RCK WRD stand at the University of Nairobi. Photo by Andrew Maina

Officers from the Refugee Consortium of Kenya (RCK) provided legal information to the refugees and asylum seekers that attended the event. Information, communication and education (IEC) materials were also distributed. These included simplified versions of the Refugees Act, simplified compilation on children laws as well as Refugee Insights magazine. Despite 90 percent of Kenyans perceiving that Kenya is a good refugee host, refugees and asylum seekers in Kenya face a myriad of challenges. Access to work and business permits are among them. RCK endeavours to provide them with legal information and representation in order for them to earn a living like members of their host community. In this regard, RCK set up an exhibition at the University of Nairobi grounds to raise awareness of our services as well as refugee rights. The Refugee Consortium of Kenya was among other organizations that were present at the event including RAS, Danish Refuge Council (DRC), International Rescue Committee (IRC), Kituo cha Sheria, HIAS among others.

Picture 2: Refugees interacting with legal information at the RCK WRD stand at the University of Nairobi grounds. Photo by Andrew Maina

In Dadaab, focus was placed on highlighting the successes in education and livelihoods. Marking of WRD started with a market day organized by UNHCR at the Equity bank grounds on 19th June as a build- up activity. It was attended by different agencies that had the opportunity to explain to the refugees and host community members about their various mandates in the camp. This event provided refugees a platform to showcase skills and knowledge acquired in the camp. Youth who had benefitted from scholarships to further their education were also given the opportunity to address those in attendance. They urged UNHCR to increase scholarship opportunities in order to reach many more youth. Other refugees brought different goods they had made for sale such as fluffy mats, tie and dye materials, tailor made clothes and food stuffs. 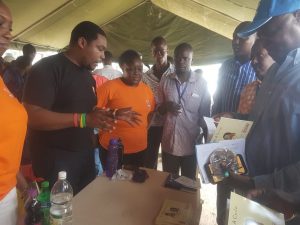 Refugee Day was celebrated across all the three camps. In Hagadera, the event was held in IRC compound B grounds, in IFO at the DRC Life Centre 1 and in Dagahaley at the Transit Centre. All agencies working in the different camps were represented. Refugees presented performances in forms of dance, poems and songs. Representatives from UNHCR in all the camps read a speech from Mr. Filippo Grandi, the United Nations High Commissioner for Refugees. His speech emphasized the need for refugees to learn skills and take education seriously in order for them to actively participate in economic development in their countries as well as the host country. The RAS representatives in all the camps also read a speech from the Cabinet Secretary Interior and Coordination of National Government. The speech focused on the voluntary repatriation process, the need for peaceful coexistence between refugees and host community as well as the need for humanitarian actors to work closely with the government in service delivery to refugees. Refugee leaders also spoke on behalf of the refugee population. They thanked the Government of Kenya for hosting them and also for the opportunities to access education, health, and other services that are available in the camps.

Officers from RCK reminded the refugees of the services we offer and thanked the camp leaders and partners for the collaboration and good working relationships with them. Refugees were also urged to visit the different RCK offices in the camps to learn more about the services we offer.

In the evening, RCK participated in a gala event to mark the World Refugee Day at the Dadaab Main Offices organized by UNHCR. During the Gala, RCK took part in the inter-agency quiz on refugee protection and emerged the overall winners.

This year, the event was celebrated at Napata grounds in Kakuma 1. The day was marked with colourful celebrations from various refugee entertainment groups in Kakuma and Kalobeyei Women’s cultural dance group. The event was attended by government stakeholders such as the Assistant County Commissioner, the Camp Manager and the Sub-County Administrator representing the County government and humanitarian agencies.

Specific representatives of the refugee population were given an opportunity to address participants at the event. There were speeches from community elders, a representative of persons with disabilities (PWD) and a children’s representative. They all appreciated the support they had been given by partner agencies such as education and relief support. They cited limited youth initiative funds, limited resettlement opportunities and delay in issuing of travel permits as some of the challenges they are experiencing in the camp.

Mr. Patrice Dossou the Senior Protection Officer spoke on behalf of UNHCR. He thanked the National Government for offering sanctuary to refugees and the host community for accepting to share their scarce resources with refugees. Mr. Nevile Ongoro spoke on behalf of all humanitarian agencies. He called for more innovative and efficient ways to implement projects with the current funding challenges being experienced and for more economic inclusion of refugees in Kakuma.

The National Government was represented by Mr. Kasili Mutambo. He read the Interior Cabinet Secretary’s speech. He pledged to work with all stakeholders to ensure the delivery of the Comprehensive Refugee Response Framework and increase durable solutions for refugees. He urged other states to contribute to ensuring that there are durable solutions for refugees by expanding third country resettlement opportunities. He warned refugees to refrain from engaging in criminal activities as the government would not tolerate lawlessness especially from persons who had fled conflict. He also mentioned that they have launched the voluntary repatriation of Burundi refugees. 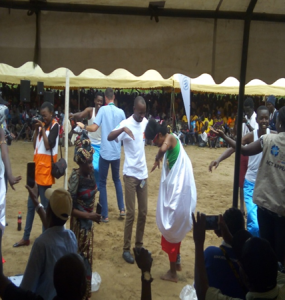 As the world marked WRD, there is still much to be done to protect the rights and dignity of refugees. In Kenya, the issue of access to work permit and taxation has been brought into sharp focus. The Cabinet Secretary for Interior and Coordination of National Government issued an order that all foreign nationals must regularize their work permits or face prosecution. This portends a protection risk for a majority of refugees that do not have the document and asylum seekers who cannot access it because they have not been officially recognized as refugees in Kenya.

Moreover, the recent proposal to link access to business permits issued by the county governments to payment of a 15 percent presumptive tax will invariably affect refugee owned businesses. This is because a number of refugee owned businesses are not registered and therefore do not have a Kenya Revenue Authority (KRA) personal identification number (PIN). Without this KRA PIN, it would be impossible to pay taxes. Without payment of taxes, especially the presumptive business tax, these businesses will not have access to business permits thereby making their operations unlawful.

In light of this reality, RCK continues to focus on the legal and policy framework that structurally locks out refugees from meaningful economic inclusion. Furthermore, it will engage with the relevant government agencies to address the refugee status determination (RSD) backlog. This initiative is aimed at reducing the waiting period of refugee recognition in Kenya and thereby opening opportunities for refugees to apply for work and business permits.